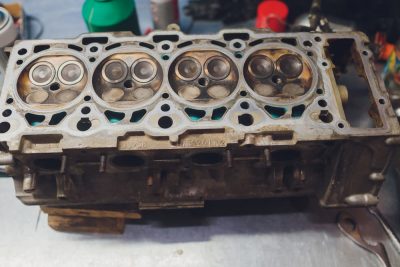 Chevy 882 heads were initially introduced into the market in the late 1970s and were designed of cast iron. Furthermore, these heads were heavier during this period.

Notwithstanding, everything has changed as we see lighter heads that offer better performance. Although the initial 882 heads unveiled had several drawbacks, such as cracking, the issue was later resolved.

Overall, updated 882 Chevy heads have a greater advantage over a traditional heavy cylinder head due to the advancements in the design and outlets. Moreover, these heads are primarily designed to withstand higher temperature, which is the core factor that adds significant value to the efficiency of the engines.

Though there are some setbacks, let us have a deeper look into the specifications and advantages of the 882 heads!

If you were to ask any professional engine builder about the engine component with the ability to make or break horsepower production, the answer would be the cylinder heads.

Any professional builder understands this because the cylinder head is significant, so it comes with chamber designs and a proven port.

Knowing how vital cylinder heads can be, today, we will look at 882 small block chevy heads, stating if they are good or not.

If you are a Chevy truck owner, you will not want to take this lightly because it can affect the overall performance of your truck.

This chevy cylinder heads were designed for four hundred ci and 350 CI engines; this Chevy’s head is an improvement from the initial heads with some problems.

One such issue is the frequent cracking of the heads due to hot temperatures. Overall, looking at the performance level of the 882 heads, it is moderate and does not demonstrate issues its predecessor exhibited.

What Are the Chevy 882 heads valve size

How Good Are 882 Cylinder Heads For Chevy?

If you are thinking of getting the Chevy cylinder heads for your car, it is critical to ascertain how good it is. Nobody wants to invest in something that does not work or will not improve their car.

Chevy’s heads were excellently good since the first time it was launched.

Most Chevy heads are manufactured using cast iron, which is heavy compared to newer heads.

As stated previously, the first generational heads faced several cracking issues, which contributed to the recall.

As with any recent technology, there are bound to be certain challenges, as the first-generation heads were not exempted.

Despite undergoing several successful pre-launch testings,’ it did not provide the same results under real-world applications from several feedbacks from users.

The Updated specifications on Chevy 882 Cylinder

Remarkably, GM should be given some credits as they could handle the issues raised within a few years.

Today, the chevy 882 cylinder heads are among the widely used heads for most truck owners. Furthermore, they are cheaper, which is something that most car owners would love.

Whether you ask anyone how good this head is, you are bound to receive different answers. Remarkably, everyone will have their review based on their experience.

However, the Chevy cylinder 882 do not disappoint as it tends to solve the previous cracking issue experienced in the first-generation heads.

Furthermore, since they are made of aluminum and affordable for everyone to purchase, we consider the Chevy 882 heads for vortec particularly good for use.

While you can still find other heads that outperform this head on any day, they are not terrible to use for your car. Overall, you can save costs and invest in these heads.

Should You Consider the Chevy 882 heads?

You might be considering the 882 heads because you want to buy it. However, the first thing to think about is not the long-term usage but considering it as a stopgap.

If you are thinking of buying cylinder heads for your car, better options are available on the market.

Although some people might argue that the purpose, they might have the big block chevy 882 heads on their car is because it came free.

However, if you decide to do occasional racing with your car, these heads are perfectly suited for your car.

Despite this, it does not mean you have to run nitrous through the head. If you do this, you can damage the heads, affecting other things in your car.

Basically, Cylinder heads are prone to defects due to the hefty loads of functions and exposure to heat from the engine. This heads too have their own set of defects.

However, the aluminum outline for these heads is gaining more popularity with the masses as these heads have turned its predecessor’s faults into valuable benefits.

Let us discuss some of the benefits of 882 cylinder heads in comparison to the other heads available in the market.

As discussed priorly in this article, the 882’s are commonly pretty lighter than the previous heavy heads.

We can all agree on the fact that, several Chevy owners who opted for the previous heavy versions of the cylinder heads have faced numerous cracking problems.

Thanks to the unique durability of 882’s, these heads are primarily designed to withstand overheating and other common attacks from the engines.

Also, not to forget that the lightweight heads provide excellent performance for race cars simply due to the rapid engine cooling mechanisms.

Camshafts are extremely important when it comes to cylinder heads. The primary functions of a camshaft are to provide aid to the closing and the opening of the valves present in the system.

A good cylinder head can be easily distinguished from an average or a bad head by analyzing the crankshaft and the camshafts on the heads.

Fortunately, the bigger camshafts present on the 882-cylinder heads can be extremely beneficial towards the contribution towards the efficiency of the exhaust valves.

Injectors present on the cylinder heads are solely responsible for injecting diesel into the antechambers and the combustion chambers.

The Chevy 882 heads have had an increased efficiency in their injector systems as these injectors are specifically designed to pump-in just the right amount of diesel and contribute to the overall fuel economy of a vehicle.

After analyzing the design of this heads, we can confidently conclude that the breathing space and the diameters of the inlet and exhaust ducts are the phenomenal features of these heads.

The primary goal of an Inlet and exhaust ducts are to let the exhaust gas out of the cylinders and to let in the air-fuel mixture into the system.

With the unique spacing of the inlet and exhaust ducts on 882’s, it is more prone to add significant performance boost when compared to the other cylinder heads.

Oil might spill into the combustion chamber when the motor has a considerable mileage as well as the valves or valve stems are rusted.

When the valve is not latching properly, combustion will suffer, and the system will not run efficiently.

Fuel might enter the oil filter through leaks in the fuel injection system. These emissions can cause serious engine problems.

If these issues are not addressed, they can cause major difficulties for the engine and total equipment failure. Generally, replacing your old cylinder head to the lightweight and facing 882 chevy heads cooling problems.

So, here are some of the signs you need to look out for on your old cylinder heads.

A decline in the fuel efficiency of your diesel engine might be triggered by valves which are not closing and providing the proper force in the combustion phase.

In this situation, the engine would require more gasoline to produce the same level of power.

For diesel engines, cylinder head crack is a typical issue that can escalate to additional problems. Temperature causes the cylinder head to inflate and compress, resulting in cracking.

Regardless on the framework, the head may be constructed of a distinct material, which might exacerbate the problem.

A break in the diesel engine’s cylinder head might enable compression air from the combustion process to enter your coolant channels.

Occasionally valves and valve guides deteriorate over time, or seals become detached (tossed or driven out of alignment), causing oil to reach the inlet or exhaust valves, and causing excessive oil consumption.

White smoke might potentially indicate cylinder head issues. In severe cases, white smoke may emanate out from diesel engine, suggesting that coolant has polluted the oil because of a broken- or worn-down head.

It might also suggest that exhaust gases are exiting through the cylinder head, indicating that it needs to be replaced.

It is critical not to dismiss these warning indications. While these indications may suggest anything other than a problem with your cylinder head, do not rule it out.

Ensure to check the condition of your cylinder head to avoid a catastrophic engine malfunction that will cost you far more money and effort.

Where Do 882 Silverado Heads Overheat or Crack?

If your car uses the 882 heads, it will crack when the exhaust seat area gets overheated. At times, overheating will occur between your exhaust seats and the intake.

To know if your head is in good condition, check the exhaust ports. If the port’s color is uniform when you look at it, you are good to go.

How to identify Chevy Heads?

For newbies, it can be challenging to identify your Chevy head’s location. You can see it from your car in most cases as it comes with different casting shapes at the cylinder head end.

Although these casting marks do not show the specifies about the head, they can enable you to identify a performing head from a non-performing head.

What are the unique features of 882 Chevy heads?

The Chevy heads are manufactured using aluminum materials. They are lightweight and disperse heat efficiently.

Nowadays, Chevy heads offer better fuel economy and are used in most high-performance race cars because of their recent upgrade.

Furthermore, they are also possible key features such as rapid engine cooling and weight saving.

Between aluminum and iron casting cylinder heads, which is preferable?

Here, it would depend on several factors. However, both cast iron and aluminum heads can withstand wear and tear.

Can a new head increase a car’s horsepower?

Changing or buying a new head for your car can improve your car performance. In addition, using a performance cam can increase your car’s horsepower.

The subtle expansion of both the inlet and outlet terminals will alter the way the engine generates power.

When head porting is combined with an efficiency camshaft with a great high inlet velocity, there is some significant potential for increased upper revs range power production.

Chevy 882 casting heads are not new on the market as many people have used them in their cars. However, there seems to be a concern about whether it is good or not.

Whatever the case seems to be, it all depends on your budget. Nevertheless, Chevy’s heads are prone to overheating and cracking, which is the only reason many people tend to avoid them.