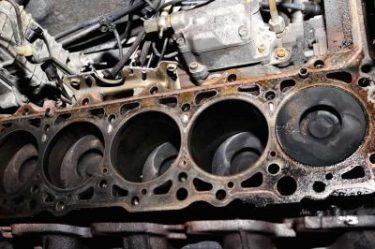 These trucks were notably smaller than first-generation trucks but had the advanced interior and exterior features.

What is a Chevy Colorado 5-Cylinder Engine?

A Chevy 5-cylinder engine that appeared in some of the first-generation Colorado models will form the subject of this discussion. After the debut of the first Chevy Colorado model in 2004, users had two engine choices.

Models did not change much until 2009 when GM introduced the optional 5.3-L, 300hp V-8 engine. Models for 2010, 2011, and 2012 had advanced features like voice recognition, Bluetooth phone connectivity, better brake systems, curtain airbags, and stability control. Chevy Colorado 5-cylinder engine itself has these features:

What Are the Chevy Colorado 5 Cylinder Common Problems(+Solution)

When considering a secondhand, first-generation Chevy Colorado 5-cylinder engine truck, focus on problems before anything else. According to expert vehicle vendors and prior users of these trucks, the following engine parts often fail.

When the valve seat has a problem, the check engine light will refuse to turn off. Additionally, you might notice the deterioration of engine performance.

Usually, the main cause of valve seat failure is a misfire. When valve seats open and close in the cylinder head, the seal is inadequate.

Solution: To make sure your valve seats get well again, change the cylinder head.

Here is another 5-cylinder engine component that often malfunctions. If the blower motor resistor has a hitch, the fan will stop working at some speeds or all of them.

Even if there is current, the fan will fail. If the blower motor draws excess current, it can damage the resistor.

EVAP vent valve is a fully sealed system. Still, it can trap dirt and stop working. If the vent valve fails to close, the check engine light for the EVAP code could come on.

Still, if the gas cap has malfunctioned or is loose, it might trigger the EVAP code check engine light.

Solution: Access the EVAP vent valve above the spare tire. If you notice that the gas cap is loose, fasten it.

If there is a broken gasket, get a new one. Does the fuel filler neck have rust? If yes, you might want to consider an EVAP valve vent replacement.

If the fuel level sensor fails, you could tell. Even if the fuel tank has some fuel, the truck will act as if there is no gas.

If the fuel sensor malfunctions, your first-generation 5-cylinder engine will not work as before.

Solution: A fuel level sensor that will not work needs immediate replacement. So, lower the fuel tank, detach the sensor, replace it, and put the fuel tank back in its position.

If the windshield washer pump fails, the washer fluid will stop spraying.

Solution: First, check the windshield washer tank and ensure it has adequate washer fluid. Ensure the hoses and lines entering the washer nozzles are not faulty or loose.

If all these parts are working correctly, your only option is to replace the windshield washer tank. Find it at the rear side of your washer tank. The replacement work is simple unless you do not do your mechanical jobs.

If the fuel injectors get old and faulty, they begin to misfire. As well, their condition worsens day after day.

Sometimes it is hard to tell that you have damaged fuel injectors because they can run for several weeks without a single symptom.

Often, the issue begins weeks after installing a new fuel injector. Failure can occur because of doing a wrong installation or an incorrect tightening procedure.

Solution – Check if you have tightened the injector well.

Is the 5-Cylinder Colorado Reliable?

Despite Chevy Colorado 5-cylinder problems, many drivers still love their mid-sized trucks. They believe that Chevy Colorado is one of the most reliable trucks around if you do not mind its small size.

Besides offering a superior warranty, the 5-cylinder Colorado truck performs better than similar midsized vehicles from other brands.

That is why it should not surprise you that more people still buy first-generation trucks in 2022.

Boasting efficient fuel consumption and extra horsepower on the highway, the Chevy Colorado with a 5-cylinder engine is the best choice.

Although rare in the North American automobile markets, these models are super reliable.

Nevertheless, you can determine how dependable your engine will be by maintaining it well. If you keep up with regular inspection and maintenance, you will catch the above issues on time.

On the other hand, if you ignore its maintenance schedule, you will face various engine problems.

Check your valves and other parts regularly and fix what needs a repair or a replacement. An air filter can cause many engine problems if it traps dirt, so replace it regularly.

Tire pressure check-ups will ensure that your tires are not losing air. Examine the rear suspension and trunk lid based for corrosion. Then choose the best solution.

Chevy Colorado models with a 5-cylinder engine use 87-octane gasoline. Thus, people often wish there were even a single diesel engine as it could offer more towing power than the gasoline engine.

In all, the 5-cylinder engine is super powerful the way it is if you choose automatic transmission.

People can choose between automatic and manual transmission 4-cylinder, 5-cylinder, or V-8 engines if they want to buy first-generation (2004-2012) Chevy Colorado trucks.

Which Chevy Colorado Engine is the Most Reliable?

We have access to first-generation (2004 to2012) and second-generation (2015 to 2021) trucks. If we were to select the most reliable model year from any generation, what can you choose? We would say that the 2020 Chevy Colorado is the most dependable truck to buy.

Chevy Colorado 2020 is a second-generation truck with similar powertrain and exteriors as the 2019 version. One reason that the 2020 Chevy truck is more reliable is that it has come out in the era of advanced technology.

Thus, it has more advanced features than older Chevy Colorado models. What we like the most is that you have three engine choices.

If you do heavy-duty truck jobs, your best engine is the 2.8-L turbodiesel, Duramax engine with up to 369lb-ft torque.

The 2020 Chevy Colorado gasoline engine has a towing power of 3,500pounds while the diesel engine can tow 7,700pounds.

These are decent figures considering this is a medium-sized truck. As for hauling capacity, it provides 49.9 cubic feet of load space in the truck bed.

People who love off-road driving will enjoy the 2020 Chevy Colorado ZR2 model. One thing that makes it perform well is the better-quality suspension system that reduces cabin vibrations when climbing bumps.

Also, the car has decent seats and impressive handling. Steering is tight but accurate, and the brakes feel firm and safe.

When people want to purchase a new or used car, the first thing they want to know is its durability. Any Chevy Colorado model has a long lifespan.

It can run for many years if you take diligent care of it. According to experts, the 5-cylinder Chevy Colorado engine is like that of the 6-cylinder engine.

Regardless of having lower horsepower and torque counts than other engines of the same caliber, the 5-cylinder lasts like the 6-cylinder engine.

Again, it depends on how well you maintain your car. If you like to take your trucks off the roads, a Chevy Colorado can be your best car model. As it is a more rugged truck, it will perform well on rough terrains.

If using the original spare parts, the engine can go beyond the 300,000miles mark. Some drivers got 200,000 miles, so we can say that this is the bare minimum miles you can get from your Chevy Colorado truck.

Also, we noted that these trucks have a good rating of about 4 to 5 stars. As a result, these trucks are reliable and do not require a regular change of spare parts, although this depends on how you use yours.

Former users claim that these models have fewer problems and do not start to bother you until after running 70,000miles. Besides, their mechanical issues cost less to solve.

Which are the most underpowered first-generation 5-cylinder Chevy Colorado models?

If you are searching for the first-generation Chevy Colorado models using the 4-cylinder or 5-cylinder engines, avoid the 2004 and 2005 models.

Their powertrain has constant issues, and they have less horsepower and torque. Concerning the second-generation trucks, stay away from the 2015 Chevy Colorado model because it had many issues.

What are my engine options if I decide to purchase a used 2004 to 2012 Chevy Colorado truck?

The 3.5-L 5-cylinder engine is our subject of discussion in this article. So, it is one of your best choices. Alternatively, you can go for the 4-cylinder gas engine or the eight-cylinder engine.

Would I be right to purchase a 2017 or a newer Chevy Colorado model?

Yes, you would be right. 2017 or newer Colorado models are one of the best in the second-generation category. Besides, they have fewer NHTSA recalls and complaints.

If you need a wireless charging system, and a heated steering wheel, you will find these in the 2018 and 2019 models.

We have discussed the most prevalent chevy colorado 5 cylinder engine problems in this article. As you can see, they are not very severe problems, and the solutions are easy to implement.

If you need a reliable Chevy Colorado truck, the 5-cylinder truck is a reliable pick. Apart from offering the best fuel economy, these trucks can last longer.

Nevertheless, you need to opt for 2007 to 2010 first-generation models using the 5-cylinder engine.

I hTope this article gave you an in depth idea about the common Chevy Colorado 5-cylinder engine problems and what is the solution to it.