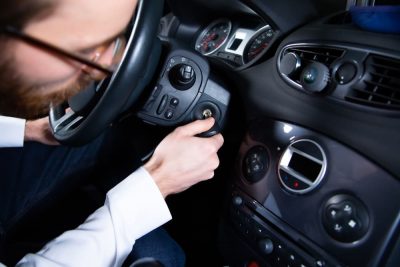 The question of how to remove ignition lock cylinder chevy without key is usually asked by Chevrolet owners, so if you’re in this situation now, you’re not the first one.

The ignition cylinder can only work without the key, but in some cases, and we don’t mean theft, you might have to extract the lock cylinder when you don’t have the car key.

This guide will cover how you can do so and install a new cylinder.

What is the Chevy Ignition cylinder?

The ignition cylinder is the thing in your car that you insert your key into for it to start. It is an essential mechanical component on the vehicle needed to start it and is unique.

The Chevy lock cylinder will only go with the corresponding key, as the latter will lift the internal pin so the car can start. Thus, you can’t turn the ignition on without the correct key.

The ignition cylinder is also mounted on an electronic component called an ignition switch which powers up the car once you turn it on.

Asides from being necessary for turning your car on, the lock cylinder on your Chevrolet will also prevent thieves from stealing your car, which is a serious problem for car owners.

This is because each ignition and key is unique, so it’ll be difficult for anyone to steal your car without the key.

The feature reduces the worries of car theft as long as you don’t lose your key or have a damaged ignition.

Although push-start cars and keyless systems are becoming pretty popular today, there are still many traditional ignition cylinders on Chevy cars and trucks.

All because it’s important to know the process of removing ignition switch with no key Chevy doesn’t mean you’re planning something unlawful.

Different situations might come up which require you to do so.

Even if you take care of your car correctly and are careful each time you turn it on, the ignition cylinder might still end up being damaged.

As mentioned, the ignition cylinder is fitted with tumblers that only accept the right key.

But when these pins become worn out or stiff, the cylinder won’t turn on the car even if you put in the right key.

In another situation, your car key or another object can get a broken piecewithin the unit.

It’s not uncommon for a key to snap while you turn the ignition, and then you’ll need to extract the lock cylinder since there’s half of your key in it.

Another case is where the lock cylinder turns but becomes stuck in the ON or RUN position. In this case, you can’t turn your car off or get the ignition position to the OFF section.

Whenever things like this happen, it means your ignition is damaged, and it’s essential to get a new product.

Rather than towing the car to the mechanic, you can take the lock cylinder out and replace it.

How Much to Replace Lock Cylinder?

If you want to install the ignition cylinder on your Chevy, the parts can cost between $149 and $165 depending on where you purchase it and if it’s high quality.

You can also pay mechanic labor costs, not more than $90, to replace the cylinder unit for you.

Step by Step Guide: How to Remove Ignition Lock Cylinder Chevy Without Key

Before learning how to extract the ignition cylinder without your car key, you should first gather the tools that you will need.

Start out by disconnecting the negative battery cable on your Chevrolet. This will protect you from getting shocked while touching the starter switch underneath the column.

It’s also important to disable your Chevy’s airbag by removing the cover on the switch.

It’s best to unlink the electrical connection leading to the airbag. All these disconnections will take up to ten minutes.

Step 2: Take Off the Steering Cover

To get to your ignition cylinder, it’s important to detach the steering cover.

Disassemble this with a screwdriver and socket wrench. To get to the ignition cylinder, take the dashboard panel off from the dashboard.

Once you finish this, it’s important to see the whole steering column and the start switch unit.

Now, detach the electrical cables and connections from the starter switch. This will free up the ignition cylinder when you can replace it.

You can detach the starter switch bolts using a screwdriver or socket wrench. You should take out the unit that the lock cylinder and the start switch unit are encased in.

Before you move on to insert the starter switch, you should crosscheck and make sure that every single part of the system is still in place after all the disassembling.

You can then install the new lock cylinder to your Chevrolet car by following the steps provided later on for you. Or, you can hire a mechanic to do it for a lower price.

Can You Drill Out An Ignition Lock Cylinder?

Some people entertain the idea of drilling out ignition cylinder Chevy rather than going through the entire process of removing the different parts, unscrewing, and disconnecting.

Keep in mind that drilling the ignition cylinder should be at the back of your mind as a last resort, even it’s easy to do it in a few minutes.

Drilling out your lock cylinder can damage the delicate parts behind it, especially the start switch.

So, you might end up having to put the starter switch and cylinder simultaneously, rather than just the latter.

You can follow the instructions below to drill out the ignition cylinder.

The first step is to test the drill bit to see if it will fit into your lock cylinder. It’s best to chose a bit that is a bit smaller than the Chevy cylinder you want to drill.

It’s also essential to use hardened drill bits because ordinary bits can be too weak to drill through metal.

The standard bit can become damaged or stuck in the lock cylinder, so go for hardened bits instead.

Step 2: Lock in the Drill Bit

Now that you’ve picked your drill bit, you should lock it into the drill chuck and tighten it. Ensure that it’s well fitted into the chuck so that it doesn’t fall out when drilling into the lock cylinder.

Step 3: Drill a Starter Groove In

Now, you can start by drilling a starter groove into Chevy’s cylinder. The driller should be set to low speed when you start and create a groove at the edge of the lock cylinder.

The hole shouldn’t be too deep in the starter groove, but it should be enough to put the drill bit into. This way, the drill bit won’t slip out when you increase the speed.

Step 4: Increase the Speed to Drill It Out

Now, you can increase the speed of your drill but to the highest possible setting and take out the lock cylinder.

The drill will do most of the work with high speed, so don’t force the drill into the cylinder.

If you’re forcing the drill even after increasing the speed, you won’t only damage your drill motor but can also cause harm to your ignition switch.

After drilling out ignition cylinder Chevy, you should crosscheck the system to ensure that nothing was damaged. If everything is fine, you can put a new lock cylinder back.

How to Replace the Ignition Lock Cylinder on a Chevy

After you extract the ignition lock, either by delinking the steering cover or drilling it out, you can install a new cylinder into the steering column.

Install it, so it looks exactly how the one you removed looked before you disconnected it. Ensure it snaps into place before you decide that it’s properly installed.

Now, you can reassemble the steering column and test out your new ignition with the key. If it doesn’t work, you can turn to a mechanic for help.

Should I Get a New Starter  Switch?

It might also be the damaged switch and not the lock cylinder, so replacing the latter won’t solve any problems and add horsepower.

A few signs show that your ignition switch needs to be replaced along with the cylinder. Some of these signs include:

01. Difficult to Turn the Key

If your key is difficult to turn when you place it in the ignition cylinder, this is a sign that your switch is damaged. The key might feel like it’s stuck, or it’s in the wrong keyhole.

While it might turn in some cases, it’d be difficult and uncomfortable to do so.

If you turn the key and the starter motor does not make a sound, this is another sign that the starter switch is bad.

While this might be a bad starter motor instead, you can keep your ears open for the clicking sound. If there’s no sound, it’s the motor, not the switch.

A common sign of a bad ignition switch is that your car doesn’t turn on when you turn on the key. The key might turn to ON, but the Chevy won’t start. In this case, you should replace the start switch and cylinder.

Your Chevy might stop working all of a sudden while you’re driving, and this is because the starter switch is faulty. The switch will be turning off randomly because of the damage.

05. The Steering is Stuck

The mechanical lock for the steering is also located in the start switch. So, if your switch is damaged, the steering will be stuck in place, and you can’t drive your car.

If your switch is damaged, it’s essential to learn how to bypass ignition switch on Chevy truck. You can decide to hotwire your car or use the jumper cables under the car’s hood.

Some people also use a drill and screwdriver, but this can damage your switch ultimately, so it’s best to avoid that.

If you have an old Chevy truck, probably produced before the mid-90s, then it’ll be possible to hotwire your vehicle.

It works by starting your car with the wires in the steering column, and it might take a longer time.

If you open the hood, you can use a jumper cable to connect the battery’s positive terminal to the coil and then power the dashboard to start the engine.

This is pretty straightforward as long as you have the jumper cables.

Rather than bypassing your ignition switch every time you want to get on the road, you should put in the time and money to replace your cylinder and switch at the same time.

By bypassing the starter switch all the time, you can end up damaging it.

Now that you know how to replace your ignition cylinder even when you don’t have a key, you can quickly fix the problem if it ever comes on.

It’s advisable to replace the lock cylinder and switch simultaneously so that you don’t end up with further damage to your ignition system.

If you’re not good with tools and car systems, then you should hire a professional mechanic to replace your ignition lock on your Chevrolet car or truck.

We highly recommend the most important beginner’s guide of What Size Tires Can I Put on My Chevy Silverado 1500?